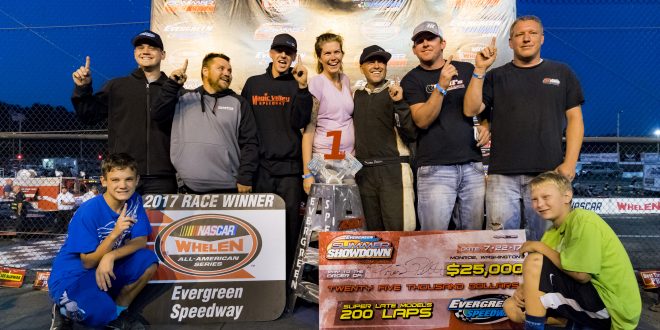 The Summer Showdown at Evergreen Speedway is heading into its seventh year, and has become one of the premier short track races in the country. This year’s event is just two months away on June 29-30, but early entries from all over the country are stacking up to make the 2018 Summer Showdown a must- see event again this year.

The early entries have topped 30 drivers from across the U.S. and Canada who will all be shooting for the $25,000 winners’ payday.  Eight different U.S. states and Canadian providences are represented so far with early entries.  Summer Showdown has proved to be one of the most competitive races in the country with six different winners in the first six years.

Leading those entries includes 2017 Summer Showdown winner Preston Peltier. The Colorado driver has been on top of the podium throughout the country over the past year including winning his fifth Easter Bunny 150 last month at Hickory Motor Speedway.

The Naches, WA Brother duo of Tayler and Owen Riddle, will be two drivers to watch as both drivers have won big races on the 5/8th mile track, with Tayler winning the 2016 Showdown  and Owen taking home the top spot of the Mark Galloway 150 in 2017.

Another favorite might be Jeremy Doss, one of hottest drivers on the West Coast. The Upper Lake, CA driver has won some big races, including the Montana 200, Fall Classic at the Bullring, and the Bud Crown Series season opener at Evergreen Speedway this year.

For the first time, a driver from the state of Tennessee will be competing at Summer Showdown, as Fairgrounds Speedway Champion, Willie Allen from Bon Aqua, TN will making the trip. Allen has raced many big events across the country in Late Models along with racing in both the NASCAR XFINITY and Camping World Truck Series.

Chris Davidson will return from Pearland, TX to try and improve on his third-place finish at the 2017 Summer Showdown. Multi-time winner at Colorado National Speedway, Jace Hansen will make his first attempt at Summer Showdown.

A strong local contingent will try to keep the trophy in Monroe, WA for first time. The hometown group is led by Trenton Moriarity, the 2017 Evergreen Speedway NASCAR Track Champion. Last year’s Summer Showdown runner-up, Lex Johnson will look to improve by one spot.  One of the winningest drivers at Evergreen Speedway in 2017 was Jeff Knight, and he will look to start that success again at the Showdown. Monroe High School Senior Tanner Holm will be striving to make up for last year’s accident during practice and race his way onto the podium in 2018.

The Eastern Washington contingent will be strong again, with 2008 Yakima Speedway Super Late Model Champion Mike Longton looking to add to his trophy collection. The 2011 INSSA Champion and Idaho 200 winner of Braeden Havens will make his return to the Showdown. Two-time NWSLMS championship runner-up and South Sound winner in 2017, Mitch Kleyn will make his second straight Showdown appearance.

Many of Evergreen Speedway’s most popular drivers will be back in action, including multi-time winner and former NASCAR Truck Series driver Tyler Tanner. Three-time Evergreen Speedway Most Popular Driver award winner Molly Helmuth, will eye another Showdown. Doni Wanat will look to change his Showdown luck and return to the podium. 2017 Evergreen Speedway NASCAR Rookie of the Year Chad Fitzpatrick will be vying to make his second showdown. The Honey Badger, Andy Sole is logging miles in 2018 as he will travel back to the Northwest from his new home in Arizona.

Other notable entries include NASCAR K&N West winner Gracin Raz, with a new car in 2018. The young gun of Garret Archer will make his return to the Showdown after taking a year off. Canadian duo of Tyler Baker and Tom Berrow will give the fans from North of the border plenty to cheer for.

Both Wyatt Gardner and Robb Touchette will be making their Summer Showdown debuts in 2018. Gardner is in his rookie season of Super Late Model racing. Touchette is making his return to racing after almost a decade away from the driver’s seat.

Many more drivers are expected to file their entries in the coming weeks with entries expected to surpass 40 plus drivers in 2018.

Tickets for the 2018 Summer Showdown will go on sale Friday April 27th at 10am. A limited number of special VIP Summer Showdown tickets will be available for $70 that include a Premium Reserved Two-Day ticket, Catered Dinner, Private VIP Tent, beverages and much more!