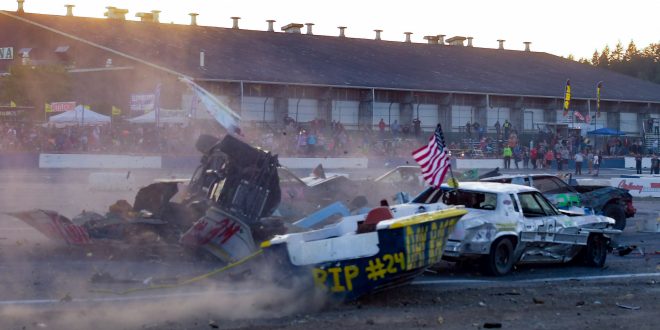 July 4th Was Full Of Carnage and Destruction at Evergreen Speedway

Once again Evergreen Speedway hosted their annual USA Birthday Bash on Tuesday night in front of a packed house. The event featured a demolition derby, Boat Races, Mr. Dizzy Stunt, Figure 8 racing and much more. The evening was filled full of action, keeping the crowd on the edge of their seat. The night was ended with a giant Fireworks Show finale.

The $3,000 to win Demolition Derby was the headline event, showcasing the big horse powered cars bashing and crashing into each other. It was Art “Junior” Sukut getting the big win and outlasting the rest of the field. Sukut earned the award for “Hardest Hit” during the event.

One of the biggest crowd favorite events was the always entertaining Boat Races, as the V8 Extreme cars pull around 10-14 foot fiberglass boats and try to knock their competitors boats off the cars. In his first ever Boat Race, it was fourth generation driver Cody Day coming home with the win. The winners were chosen by audience participation with the loudest applause. It was Cody’s father, Sam Day taking home the win earlier in the night for the regular Main Event in the V8 Extreme Cars. 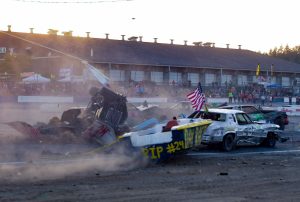 The Monroe Grocery Outlet Super Stock Figure 8 division showcased one of Evergreen Speedways premier divisions with side by side racing and dangerous intersections throughout the night. For the second time this year a first time winner rose to the top, Eric Allison collected his first ever main event win. It was Quenton Borreson continuing his strong runs with a second-place finish and Steve Cox in third.

The Mini Bump to Pass class was on-hand for the first time at Evergreen Speedway with a thirteen car field of four-cylinder excitement. It was lady racer April Glaefke taking home the main event win.

For More Information or to purchase tickets visit www.evergreenspeedway.com or call 360-805-6117.

Share
Previous Entries coming in from all over for 6th Annual Summer Showdown!
Next Evergreen Drift ProAm Round 3 Registration Page!