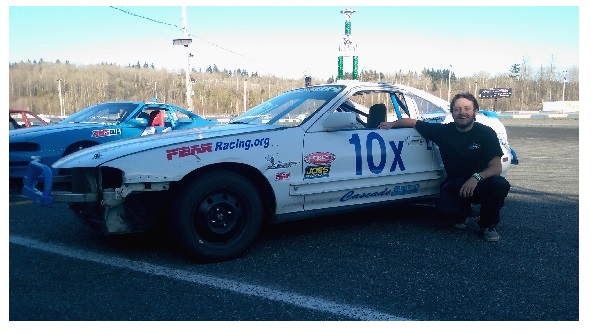 Cody Hoopes of  Redmond, WA.  capitalized on a lucky starting draw for the Interstate Batteries March Madness enduro at Evergreen Speedway and led every lap to claim his first 3 Hour Enduro victory, but not before the drama of a late race pit stop nearly cost him the win. Mark Hubbard closed to within five car lengths, but didn’t have quite enough at the end to exploit Hoopes’ stop for fuel in the closing minutes of the race. A jubilant Chris Bannon finished third while Cullen Hubbard and Andy Reece rounded out the top five.

Hoopes pulled number one in the pre-race draw for starting position and never looked back as he led every lap. By the ten minute mark the top five had settled in at the front for a long afternoon of racing. Pit stops jumbled the field occasionally, but the leaders remained the same with only Reece falling as far back as 7th after pitting. The racing was exciting as the leaders stayed bumper to bumper through heavy traffic for most of the first half of the grind. As yellows flew and pit stops came into play, Hoopes remained on the point as Cullen Hubbard pitted first, staying on the lead lap. Mark Hubbard pitted a lap later and lost a lap in doing so. Later a flat tire cost Cullen a shot at the win and Mark paced himself, only pushing to get past the leader and back on the lead lap as the two hour mark came and went.

With time winding down everyone wondered if young Hoopes could go the distance on a single tank of fuel. All questions were answered as the race clicked past the five minutes to go mark and Hoopes car sputtered down the back stretch. He dashed into the pits and his crew went to work, stopping momentarily for only a splash of fuel. Hoopes charged down pit road and back into action a mere 5 car lengths ahead of M. Hubbard of Bothell. With a scant two to go, Hubbard desperately tried to close the distance, thrashing his Honda Prelude around every turn trying to reel in Hoopes, but had to settle for second in the end. Mark later admitted he had nothing for Cody. He said, “I should have pushed harder after getting by him [Hoopes] to get my lap back. I couldn’t believe it when he came out of the pits right in front of me!”

When reminded of the $500.00 first prize in victory lane, Hoopes showed the concentration and drive of a champion, saying, “I completely forgot about that. That’s awesome! I was just going for the win.” Next up at Evergreen is an open Drift event March 14th and then the NASCAR season officially kicks off April 4. Get all the details at www.EvergreenSpeedway.com.