Those drivers led from the pole during three 25-lap heat races to determine the top 24 drivers that transfer to guaranteed starting spots in the 200-lap Summer Showdown main event Saturday night.

Gilbert used the inside line with three laps to go to pass Dylan Lupton to take the final transfer spot. Lupton will have to race his way in during Saturday’s LCQ race or use a provisional. The heat race was won by Bubba Pollard. Also transferring to the Summer Showdown on Saturday; Mike Longton, Garrett Evans, Blaine Rocha, RJ Johnson in his first Showdown start, and veteran Ron Eaton.

Missing the transfer spot in heat 2 and having to use the LCQ race or provisional is 2014 Washington State and Evergreen Speedway Champion Mike Holden. Greg Voigt, Naima Lang (who spun during the race,) Tom Berrow, Tyler Baker, Tim McDougald and Jay Johnson who will also have to race their way in or use a provisional.

Moore passed Gary Lewis with three laps to go to secure a spot in the main event.

Going to the LCQ or needing to use Provisionals to race in the Summer Showdown are Gary Lewis, Molly Helmuth, Toby Becker who spun on the frontstretch on lap one, Brandon Scheiber and Shane Sawin.

Friday’s heat races locked in the top 24 starting positions. Positions 25-28 will be the fastest 4 by time who did not qualify through heat races. Those drivers do not have to run the LCQ. Positions 29-32 will be top 4 from Last Chance Qualifier. 33 & 34 Top 2 Evergreen NWAAS drivers not qualified. Position 35 & 36 Provisional from Tri Track, SRL, Pacific Coast, CRA, SSS, RCMS etc. Tie Breaker will go to fastest qualifying time.

Roger Drake held off Darrell Lutovsky on a restart with 2-laps to go to take the victory in the 30-lap NASCAR Les Schwab Street Stocks main event.

Lutovsky finished second after setting a new track record and a battle for position with Chad Fitzpatrick. Fitzpatrick dropped to fourth in the final two laps allowing Card Davidson to take third.

The main event for the Summer Showdown is on Saturday. Grandstands open to fans at noon. Pre Race festivities feature a fan fest including live music, vendors, a car show and Seahawkers. Preliminary racing includes the Pro 4 Alliance and the Les Schwab LCQ race that will transfer four remaining drivers into the Summer Showdown.

Tickets for the event are $30 dollars for general admission. Children ages 6-12 are $15. Fans are encouraged to come early to enjoy all the festivities. For more information log onto www.EvergreenSpeedway.com. 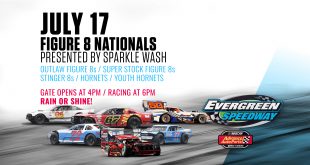