Seven years ago, Doug and Traci Hobbs of High Road Promotions, took over operations of Evergreen Speedway. From the start they had many dreams and visions for the historic “Super Speedway of the West”. One of those dreams became a reality last week as the iconic 3/8-mile track at Evergreen Speedway was repaved with a new surface for the first time in several decades.

“Since we took over the track in March of 2011, we’ve had a series of one year, three year and five year projects. The 3/8 track has been on that list from the beginning. To accomplish a complete restoration project of the entire track has taken a lot of time, money and effort to do a top-notch job,” said High Road Promotions President Doug Hobbs. “The track used to sit under 2-3 feet of water many months of the year in various spots. It has taken a considerable amount of subterranean repair and new drainage construction to channel the water properly over the past seven years to be able to repave this week.”

The new surface has created excitement from drivers, racing series and fans throughout the Northwest and across the country, as the story has gone viral on social media, and industry blogs.

“To say we are excited to have it completed is an understatement! We know the teams are going to love the new surface, and that the fans are going to see some of the best wheel to wheel racing in the country,” said Hobbs. “The outpour of enthusiasm from Northwest drivers and teams has been amazing. Blend this with the tremendous car counts we already have, and I think 2018 is sizing up to be our best year yet.”

“Tourism is vital to our cities and Snohomish County, of which Evergreen Speedway plays a major role. Special thanks to the Snohomish County Tourism Promotion Area who helped in part with support funds for this very expensive project.”

The new surface will have impact many forms of motorsports activities at Evergreen Speedway. The front stretch will be a new surface for Evergreen Drags. Both the Evergreen Drift and Evergreen Autocross will see benefits of the new surface during many of their different road course layouts.

One of the biggest changes for drivers will be the progressive banking on the 3/8-mile track. The banking is now evenly progressive with the increase from 10 degrees to 12 degrees in the middle of the turns. Another change will be racing on the 5/8-mile track, as drivers will have a whole new front stretch to navigate, a new entry into Turn 1, and the removal of the previous “bump” in Turn 4.

Drivers will get their first view of the track this upcoming weekend as Evergreen Drift will have an open event Saturday. There will be an open Super Late Model tire and test session Saturday Night. One of the fastest growing groups at the track is Autocross and they will hit the new surface on Sunday.

Lots of excitement is stirring up for the 2018 opening night as drivers from across the Northwest are planning to come race on the new asphalt. Evergreen Speedway will open the 2018 NASCAR season March 31st. More details on the 2018 schedule will be released in the following weeks.

The repaving of the 3/8-mile track is just one of many improvements the Hobbs’ and their team have planned for the future, as more projects are in the works for the upcoming years.

“Other projects on the horizon are new box suites across the top of the grandstands, new front stretch catch fence, additional paved parking areas in the pits, upgrades to grandstand restrooms, and of course working with NASCAR to bring the Camping World Truck Series back. That will require extensive repairs to the 5/8 track,” said Hobbs. “We are invested and committed to keeping short track racing strong in the Pacific Northwest, and are always looking to make Evergreen Speedway the best for fan and driver experience.”

For more information on Evergreen Speedway visit www.evergreenspeedway.com or call 360-805-6117. 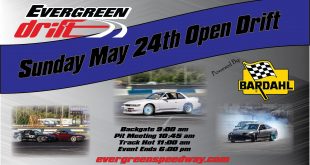 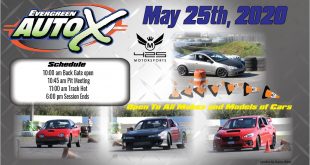