If there is one thing that every race track in the country has in common, it’s a safe bet that there is one driver that has been slugging it out for as long as anyone can remember. He’s the guy that has supported the track, represented his sponsors and those who have been on his crews, always made sure that his “better half” is aware of how much her and his families support means to him.

He’s also the racer that has been of service to his division that he races in. Always the guy that will take on a position that will help his fellow racers keep having a series to race in, will represent his club to the best of his ability, because that’s how he truly believes it should be done.

Doug Delfel is that guy out at Evergreen Speedway. His iconic car number 01 was retired by the Figure Eight Racing Association (FEAR) way back in 1999 to honor Doug’s up until then 25 years of service to FEAR. He had served as the President of FEAR four times and has been a board member six times. Add to all that his 3 championships over the years and the fact that Doug was named as one of the top now 60 top drivers in the history of Evergreen Speedway. Oh yeah, he was inducted into the Evergreen Speedway Hall of Fame in 2010!

For 29 years, Doug Delfel has competed in the Figure 8 Nationals, even racing in the very first F8 Nationals won by the “Crazy Cajun” Vern Deitz in 1984!. This race, along with the 60 Minutes of FEAR have been called the “Must Win” events that anyone who has strapped into a Figure 8 race car will have on their bucket list to win. These races are the Daytona 500 of the yearly FEAR calendar. Past Figure 8 Nationals winners include Vern Deitz (3-times), Ricky “The Kid” Deitz (2-times), Steve Peters (4-times), “Mr. Excitement” Steve Cox (2-times), “The Cowboy” John Carlson (2-times) and even Doug’s brother Brian Delfel won the Figure 8 Nationals on 3 separate occasions! 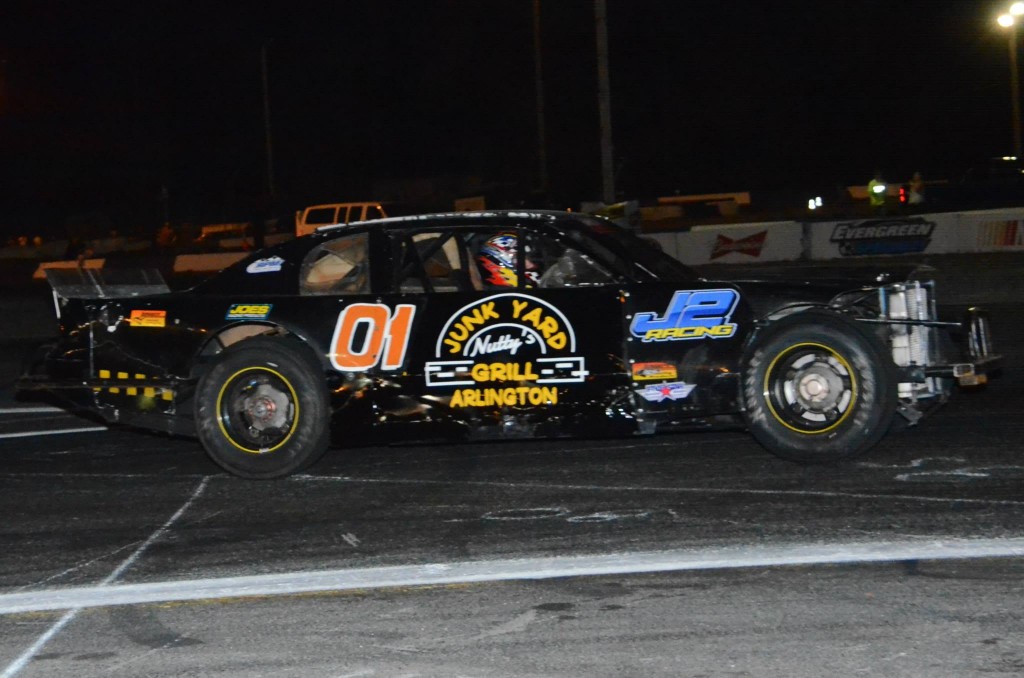 Needless to say, it was an emotional time on the Angel of the Winds Victory Stage last Saturday night, as finally (and not without some drama thrown in!), Doug Delfel captured his first Figure 8 Nationals victory! 17 cars in the Monroe Grocery Outlet Super Stock Figure 8 Division started the race, with several past F8 Nationals winners lined up, In addition to those named above, past winner Rich Groshong and the son of the 2001 event winner Malcom “The Maniac” Lindberg Brandon Lindberg were on the track for this race. The starting line-up was determined by a pill draw during opening ceremonies.

Delfel sprinted to an early lead in the 75 lap race. Steve Peters worked his way through the field and eventually took over the lead. As the race was winding down, a mechanical issue forced Peters to turn the lead back to Delfel and “The Griz” took the 01 to the checkered flag. On the stage, an emotional Delfel thanked his family, crew and his sponsors, including Nutty’s Junkyard Grill, J2 Racing, the Everett Car Connection and his business Harbour Point Towing & Service. Doug also expressed his thanks to the Monroe Grocery Outlet for their support of the Super Stock Figure 8 division. Finishing second was Rich Groshhon and third place went to Brian Little.

The Buzz Inn Steakhouse Stinger 8’s put on a great show for the nearly packed grandstand! “Hammerhead” Lance Ograin got the win with 14 cars starting the race. Matt Somerville survived for second and Branson Lindberg took third. It should be noted that Lindberg competed in all three Figure 8 divisions Saturday night. The “Iron Man” drove his familiar #88 Stinger 8 and then drove the V88 Sean Peters Tribute car the other two F8 races. Nice job Brandon.

Doug Wilkinson thrilled the fans with another one of his patented “Here they come out of turn 4 ladies and gentlemen… Matt Greene on the inside. Wilkinson on the outside, Who’s gonna win it???? There coming to the line…… It’s Wilkinson at the line by a nose!!!” Insert the sound of the crowd going bonkers here! The best seat in the house for the finish was Pete Brady with his third place finish.

This weekend marks the return to Evergreen Speedway of the K&N Pro Series West. The West Series has raced at Evergreen more times than any other track in the history of the series. Points leader Noah Gragson is holding onto a slim 2-point lead over Chris Eggleston. Noah made his first start in the K&N Pro Series East this past weekend at the Watkins Glen road course, and is looking forward to getting back in his #7 Jefferson-Pitts Racing Ford this Saturday. NAPA Auto Parts once again has gotten behind this race to present the 150 lap race on the 5/8’s mile oval.

Michaels Bellevue Toyota presents the Super Late Model 100 lap race prior to the West race on Saturday. Defending season Champion Mike Holden is looking for his second straight win on the big 5/8’s mile track. His LB Motorsports team switched form a Chevrolet to a Ford power plant prior to the last time the series raced on the 5/8’s with Holden getting the win. Doni Wanat enters this weekend in second place with rookie Luke Selliken in third.

Get your favorite seats online at www.evergeenspeedway.com for this weekend’s events. Check out Evergreens web site for all the information. There is still plenty of racing left in the 2015 season, so make sure and join us at the Super Speedway of the West for all the fun and excitement!