Champions Will Be Crowned Saturday Night At Evergreen Speedway 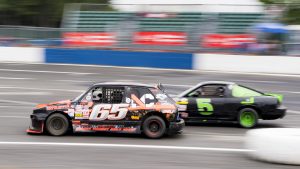 Racers have been battling all year long to be crowned champions of Evergreen Speedway but for some drivers it will come down to the final laps of 2017.

Saturday night will feature the first of two Les Schwab Tires Championship Nights at Evergreen Speedway. It’s been an amazing year of racing for the “Super Speedway of the West” during its 63rd year of operation.

In just his second year of Super Late Model racing, Trenton Moriarity leads the way in the Speedway Chevrolet Super Late Model division. Moriarity holds a commanding thirty-six-point lead over second place Jeff Knight, with Daniel Moore just four points behind Knight in third. All three drivers have taken home wins throughout this year. There’s no doubt that this will be the featured event of the evening. The winner of the division earns a trip to the NASCAR Banquet in Charlotte, NC along with the Rookie of the Year award. Chad Fitzpatrick is currently in the lead for this coveted honor.

The closest battle heading into the night is the Foster Press Mini Stocks with just three points separating Brad Thomas over defending champion Nat Barber. The division has showcased some of the closest and most intense racing of the year. The championship battle is also in reach for Brian Cottrell as he is just twenty-two points behind Thomas. All three drivers have main event wins on the year. Snagging this win might also mean taking home the championship as well.

The Interstate Batteries Hornet Division will be up for grabs as defending champion Dawson Cox will look to hold off Toby Jenkins with just a six-point lead heading into the night. It’s been a shootout between both Cox and Jenkins all year long in field of twenty-five plus cars every race. Every heat race and main event for the division will play a factor on who is the champion.

No driver has won more races in the recent years at Evergreen Speedway than Roger Drake. The veteran driver has been very strong this year in the Les Schwab Tires Street Stocks but Steve Woods has showcased himself as the two will engage in their final battle of the year. Drake currently holds a nineteen-point lead over Woods heading into the final night.

Also in action will be the Youth Hornet division as the 12-14 year old drivers take to the track for the final time during the 2017. Plus the Columbia River Legends will make their last trip to Evergreen Speedway this year.

For more information or to purchase tickets visit www.evergreenspeedway.com or call 360-805-6117.