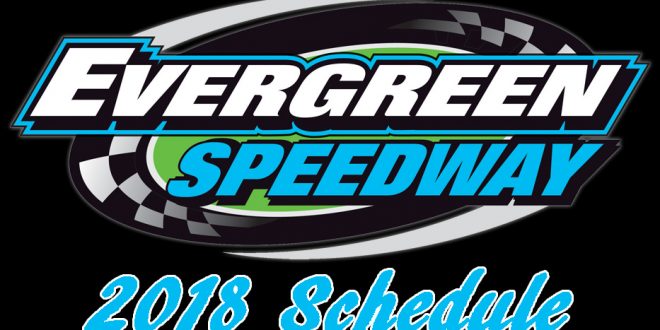 The excitement has been brewing for the 2018 schedule at Evergreen Speedway, as the historic track heads into the 64th year of operation. With new events on the horizon and newly repaved 3/8-mile track, the schedule is packed with excitement.

The season will kick-off on March 31st as fans will see action for the first time on the new surface with multiple NASCAR divisions hitting the track. Opening night will feature some very special guests concluding with a giant fireworks show to finish the night.

This special night will also be the return of the Budweiser Crown Series. The six-race series will be back with lots of interest from fans and drivers across the Pacific Northwest. The format will be the same as last year with one race each month, three on the 3/8-mile track and three on the historic oversize 5/8-mile track.

One addition to the Bud Crown Series will be the Northwest Super Late Model Series joining forces with the Evergreen Speedway NASCAR Super Late Models for two races in 2018. The two races will be the Central Welding Supply 125 on July 28th and the Les Schwab NASCAR Championship on September 8th. The NWSLMS will feature some of the top drivers in the Northwest battling it out against the stars of Evergreen Speedway.

The newest addition to the schedule will be the Evergreen Cup on October 6th to wrap up the season with a $5,000 to win Figure 8 Open Comp Race. Another feature event for the season finale includes the Northwest Hornet Nationals. The Evergreen Cup is sure to be one of the most exciting events of the season. The race will be in support of Breast Cancer Awareness month. Awards for “Best Themed Cars” will be given out. This first annual event will certainly keep you on the edge of your seat all night long!

For the first time in three years fans will see Monster Trucks return to Evergreen Speedway as a premiere national Monster Truck Tour invades the Evergreen State Fair on August 24th and 25th for a special two-day show.

The 7th annual Summer Showdown 200 is one of the most premier NASCAR short track races in the country and will grow even more in 2018 as the event will move back to June 29th and 30th on the “Super Speedway of West” 5/8th mile track. The $25,000 to win Super Late Model feature will be joined by the Columbia River Legends for a two-day Legends Regional Event. The warm up race for Summer Showdown will again be the Mark Galloway 150 on the big track May 26th. Another new event is the Western Round Up, which will feature several types of 4-cylinder cars and trucks on June 23rd. Racers throughout the Pacific Northwest and Canada are very excited to showcase their unique classes and show fans how cool these touring groups are!

This year’s NSRA Rory Price Memorial on August 4th looks to be the richest asphalt Winged Sprint Car race in North America. These cars are the fastest cars to ever race at Evergreen Speedway. WESCO Sprints will again join the huge field vying to take home some of the $40,000 purse. Drivers from all over the country will be making the trip for the big payday and a new track record.

Joining the action during the Rory Price Memorial will be the Northwest Focus Midgets as they hit the pavement of Evergreen Speedway for the first time. The award winning premier series is one of the largest traveling dirt series in the Northwest and will make the move part-time to asphalt in 2018.

The most dangerous intersection on the planet will once again feature some of the best Figure 8 racing in the country with the 90 Minutes of Fear on April 28th with all three Figure 8 Divisions doing battle on the track. The ever-popular Figure 8 Nationals will hit the track on August 18th.

Evergreen Speedway will once again play host to the NASCAR K&N Pro Series West on August 11th as the rising stars of NASCAR will duel it out on the 5/8-mile track for 175-laps. The night will also feature a 100-lap Super Late Model 5/8 feature.

Of course, Evergreen Speedway will be the place to go for family entertainment and Fireworks including Demo Derbies May 26th with the Sean Peters TruckFest, the July 4th annual “USA Birthday Bash” plus two big shows during the Evergreen State Fair. These events have become one of the hot spots in all the Northwest for some of the best non-stop action and fireworks shows celebrating our great Country.

For more information on Evergreen Speedway and to see the entire 2018 Schedule visit www.evergreenspeedway.com. Details on the racing events and non-racing schedule for 2018 will be released in the coming weeks.