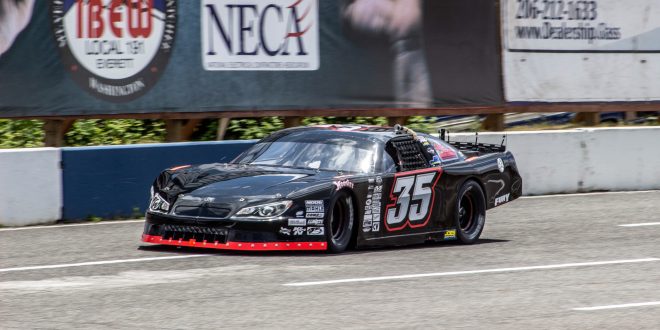 In the first “Big Track” race of the year for Evergreen Speedway, it was Robb Touchette taking his car to victory lane after an 11-year hiatus from the Super Speedway of the West. It came down to a green-white-checkered finish for Touchette to grab the top spot after returning to Super Late Model racing this year for the first time in over a decade.

Drivers from across the Pacific Northwest came to Evergreen Speedway to honor a great young man and some great racing in the Mark Galloway 150. The early on favorite was 2016 winner Tayler Riddle. The Naches, WA driver set fast time and drew a zero for the invert putting him on the pole.

The race started with an early incident on lap 2 ending the night for Trenton Moririaty and Mike Longton after both drivers hit the turn one wall. The restart would put a Lex Johnson to the lead. Johnson would hold the lead until the lap 100 break.

The lap 101 restart stacked Johnson and Tyler Tanner side by side, Tanner would come away with the lead but lost it just two laps later to Garret Archer.

The race was shaping up to be a shootout with Archer and Johnson in the closing laps. As Archer tried to hold off a hard charging Johnson riding his bumper around the track for more than 20 laps. Johnson finally got the lead way from Archer on lap 147. When the drivers entered turn 1, Archer tried to slingshot back to the inside when the drivers made contact sending both of them sideways.

The late caution would set up a green-white- checkered finish with Mike Holden on the inside and Touchette on the outside. Holden brought the field to the green but had a flat tire, sending him high in turn 1. Touchette would grab the lead and never look back over the final few laps.

Andy Sole would finish in second, while Johnson took home third. Doni Wanat took the fourth position with Archer rounding out the top 5.

The Columbia River Legends featured a full field of cars with the hot shoe of Devon West taking home the win. The veteran driver of Duane Swanson finished second and Dana Glenn rounded out the top three.

In the Mini Stocks it was the repeat winner of Lane Sundholm taking home the top spot. Justin Brave finished second after a early race incident. Jonah Vick continued his impressive year with a third-place finish.

Nobody had anything for the speed of Steve Ptacek tonight in the Street Stocks as he cruised to another win. Mike Marthaller Jr. gained a second-place finish and Jim Foti rounded out the top three.