The Thunder Rolls into Evergreen Speedway

Monroe, WA- There isn’t a NASCAR Hometrack in the country that doesn’t provide a “marquee” event in their yearly calendar. These are events that are designed to provide fans an event to salivate over, no matter what the feature is. Fans of Evergreen Speedway are fortunate in the fact that Highroad Promotions has events like the upcoming Galloway 150 Shootout, presented by The Monroe Grocery Outlet and Shoreline Community College. We also have the Annual Summer Showdown, Formula Drift and new to Evergreen this year, the Red Bull Global Rally Cross.

One such “marquee” event happened this past Saturday night as the Rolling Thunder Big Rigs made their annual appearance at Evergreen Speedway, with 10 full race, smoke belching, loud, obnoxious, tire boiling and hard racing Peterbilts, Macks, International Harvester and even a Volvo semi-trucks lighting up the crowd with their brand of entertainment. And entertainment the provided!

Qualifying was led by Dustin Smith, who turned a lap of 23.011/58.668 mph on a slightly damp 3/8’s mile oval. Brian Wilson won the 4-lap trophy dash held after opening ceremonies, with 8-lap heat race wins by Scott Zahn and Dave Barr. One note of interest was the driver of the #96 truck Jay Steiger. When interviewed during the Fan Fest, Steiger mentioned “This is my first time racing ANYTHING.” When asked to follow up on that statement, Jay said “I’ve never raced anything in my life. This will be the first time I’ve tried something like this” Given that this is a “Family Friendly” race recap, I’ll keep the superlatives to a minimum, but the man certainly got my respect. And I’m reasonably certain that he gained a ton of respect from not only the fans, but from his fellow racers as well. Jay led a lot of his heat race and represented the Rolling Thunder Big Rigs in an impressive fashion.

On to the 25-lap main event. With turbos spinning and air horns blasting, the field took the green and it was a 4- truck battle for the entire race. Several time fans witnessed 3-wide racing going into turn 1, and trucks sliding all the way through turns 1 and 2 with smoke billowing off all 4 rear tires! Fast qualifier Dustin Smith picked up the win, with Dave Barr in 2nd and Tom Rayton standing tall on the Angel of the Winds Winners Stage in 3rd. All in all, an amazing performance by all the drivers and teams in the series. If you need more information on the Rolling Thunder Big Rigs, check out www.gibbonsracing.com.

In other racing action, the Outlaw Figure 8’s fielded an impressive 10 cars for their main event. Nick Gunderson set fast time in afternoon qualifying. Heat race wins went to Points leader Seth Funden and the returning Jake Repin. In the 30-lap main event, The Cowboy John Carlson proved why he is so good on a damp track with his first win of the season. Nick Funderson gave it everything he had to get by The Cowboy, but had to settle for 2nd place and Chris Curtis finished 3rd.

The Interstate Battery Hornets provided some history to Evergreen Speedway with 72 years young Pete Jensen holding off the furious charge of points leader and 2nd year driver Dawson Cox. Jensen has raced at Evergreen Speedway in the past 6 decades, and decided to run the full season to “get one more win under my belt”. Jensen mention in his post-race interview with Ben Greaby that “I’m having more fun racing this year that I’ve ever had in all the years that I’ve been competing hear at Evergreen. To be able to hold of a talent like Dawson Cox, and I’ve raced against his dad a time or two over the years, is so gratifying” Jensen also led the 18 cars that qualified earlier in the day, and heat race wins went to Michael Jensen (no relation), Chad Roberson and Justin Brave.

Interstate Battery Hornets took to the track for their main event. Congratulations to Hailey Belew for her exciting win, with Dodge Smirz finishing 2nd and Cameron “Call me Bubba” Iverson getting 3rd. Hailey mentioned in her post-race interview that a young fan of hers told her that she was going to win her race, and Hailey promised her that it would happen!  This is a new and extremely fun division for 2016 at Evergeen Speedway. 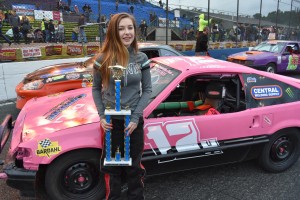 The Northwest Pro 4 Trucks attacked the 3/8’s oval, and in the 10 truck 30-lap main event, it was the 2015 Season Champion Doug Wilkenson taking the checkered flag ahead of Aaron Green and the ailing truck of Ellensburg’s Cecil Howard in 3rd.

Coming up this weekend is the big Memorial Day Weekend at Evergreen Speedway. Friday will see practice for all the classes that will be racing as part of the Galloway 150 Shootout. In addition to the Les Schwab Street Stocks, this weekend will mark the return of the Columbia River Legends to one of their collectively favorite tracks to run at. They will run both Saturday and Sunday on the 3/8’s oval. This is an important event for the Legends as it is an INEX Regional Event towards the National Points Championship. The WESCO Sprints make the first of their 2 race dates at Evergreen on Saturday, and the Foster Press Mini Stocks led by the undefeated Nat Barber in 2016 will be racing as well.

The main event on Saturday will be the Galloway 150 Shootout Presented by Monroe Grocery Outlet and Shoreline Community College.Sunday will feature the Sean Peters Memorial Truck Demo Derby Presented by Quality Sleep Mattress. All of the Figure 8 classes will be running along with the Northwest Vintage Modifieds and Interstate Battery Hornets. Fans will get a kick out of the School Bus Races and the night will end with a majestic fireworks show that Evergreen Speedway is known for.    Tickets are available online at www.evergreenspeedway.com, or call the Speedway office at 360-805-6100.

Share
Previous May 28 Galloway Shootout 150
Next Sunday, May 29 Schedule Updated 5/27