David Mayhew Makes it 2 in a Row at Evergreen!

The K&N Pro Series West returned to Evergreen Speedway Saturday night for the series’ 54th race at the historic .646-mile. Legends like Bill Elliot, Geoff Bodine, Ken Schrader, Ray Elder, Ron Eaton and Chad Little have won West Series events over the years, and the name David Mayhew can now be added to the list of multi-time winners at this historic track.

The NAPA Auto Parts 150 presented by Toyota saw 17 cars take the green flag. The #36 car of Jesse Iwuji crashed hard into the turn 1 fence in practice and could not continue. Last season’s Sunoco Rookie of the Year winner James Bickford in his Sunrise Ford/Interstate Plastics Ford qualified at the top with a lap of 23.294 seconds (99.837mph) for his second straight Coors Light 21 Means 21 Pole Award. David Mayhew qualified second with a lap of 23.317 (99.738 mph), and Bickfords teammate Ryan Partridge qualified third with his effort of 23.323 second (99.713 mph).

The race started with Bickford and Mayhew on the front row. The field was led to the green flag by a Toyota Tundra decked out in Seattle Seahawk colors. As the field took off into turn one, Dylan Caldwell and Johnny Borneman got together and hit the turn one wall hard effectively ending both their nights. After the track was cleaned up and the race restarted, James Bickford held off furious charges from Mayhew, with Mayhew being threatened by Ryan Partridge. On lap 35, Mayhew found a way around Bickford and cruised his MMI Racing/Ron’s Rear Ends/Pour House Chevrolet to the half-way break at lap 75. One driver was very happy to see the caution come out on lap 75! Mooresville NC driver Brandon McReynolds in his NAPA Auto Parts Toyota was visibly slow as the laps wound down prior to the break. His Bill McAnally Racing crew got the problem fixed, all the while down 2 laps on the restart.

With the restart on lap 75, Mayhew held onto the lead and went wire-to wire for the win. Ryan Partridge got a look under Mayhew coming out of turn to early in the second half, but Mayhew headed off the challenge and managed to eventually build up a 2 second lead. As the race wore down, Mayhew went into “conservation mode” to make sure his second trip to victory lane was far different than his first trip last year.

Fans will never forget Mayhew’s wild win last season, with his last lap move against Dylan Lupton in between turns 3 and 4 to get around Lupton and take the checkered flag. This year he was on cruise control. “It was a lot less stressful this year!” Mayhew said on the Angel of the Winds Victory Stage. “My crew gave me a flawless car, and when it was in clean air, it was a rocket ship”

Rancho Cucamonga CA driver Ryan Partridge finished second in his Sunrise Ford/Eibach Springs/Lucas Oil Ford. Finishing third in the race was Chris Eggleston in his NAPA Belt and Hose/H20 Fire Protection Toyota. The point’s battle for the season championship really tightened up after the NAPA 150 Presented by Toyota. Tied for the lead are Chris Eggleston and Noah Gragson, who came into the night separated by only 2 points. Gragson driving for Jefferson/Pitts racing finished 5th behind teammate Grayson Raz. The next race for the K&N Pro Series West is August 22nd at the Colorado National Speedway. 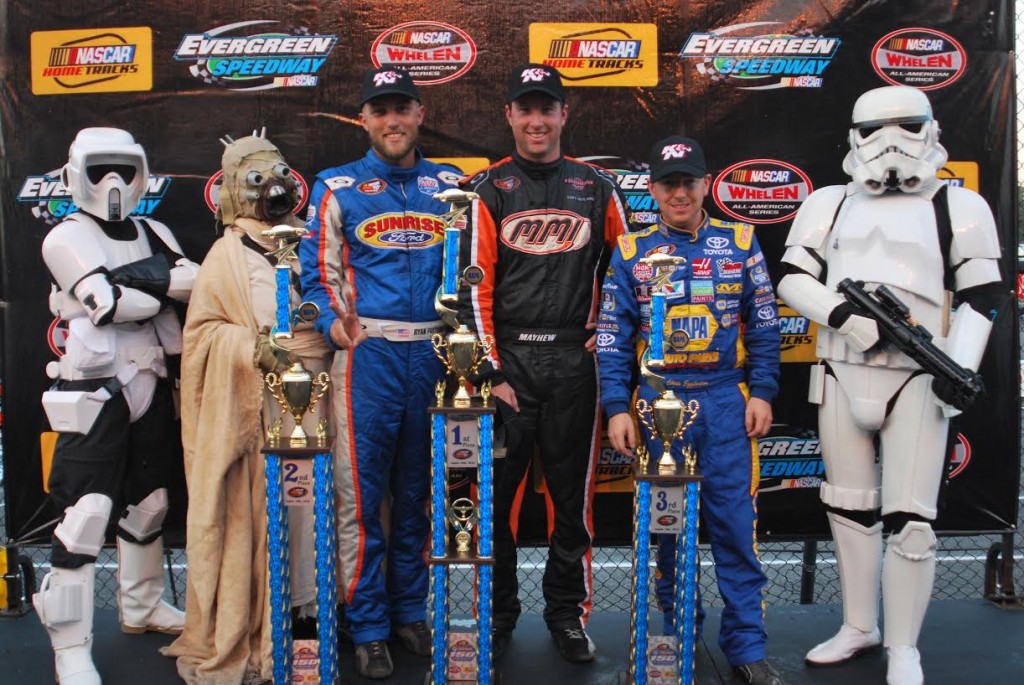 The companion event for the night was the Michael’s Bellevue Toyota 100 for the NASCAR Whelen All American Series Super Late Models. 20 cars lined up for the race with top qualifier Blake Williams out of Spokane starting on the front row alongside Garrett Archer. Williams was the only participant in both the K&N Pro Series West event and The Michaels Toyota 100.

This race had everything a Super Late Model fan would want to see. Blake Williams and Garrett Archer battled hard for the lead on the races opening laps until Williams could pull away and keep the 16W Ford out front. What had the crowd fascinated was all that was going on behind Williams, as it was pass after pass for position, especially when the 39 of Pete Harding poked his nose under Williams a couple of times before a thrilling duel between the two with Williams coming out on top. Then Parker Stephens (fresh off his Miller 200 win down at South Sound Speedway the previous Saturday) worked his way into a battle for the lead, finally getting to the top spot.

And then the fun really began. Jason Kooy found a groove to his liking, and his #26 Budweiser/Crown Distributing Chevrolet was hooked up. Kooy got around the leader with about 15 laps to go and held on for his first win ever in a Super Late Model. It was a popular win for not only for Jason, but the entire Kooy family as well. The Kooy’s have been long time racers out at Evergreen Speedway with the Western Washington Racing Association. A couple of years ago Jason decided to give Late Models a try, and one could see improvement every time the team took to the track. At the beginning of this season, Jason decided to get some issues with his back taken care of before getting back behind the wheel, and it all came together for him and his team Saturday night. Shelby Thompson finished second with Parker Stephens coming home third.

Coming up this Saturday will be another of the popular Frontier Communications Family Nights. The feature event of the evening will be the Street Stock Nationals with a whopping $1500.00 to the winner. This event will present Evergreen Speedway Les Schwab Street Stocks led by 2015 points leader Chad Fitzpatrick who holds a 6-point lead over defending champion Roger Drake with Jim Foti, Steve Ptacek and Chuck Richard rounding out the top 5. Cars from all over Washington State are expected to compete in this annual event. Also on the card will be the Outlaw Figure 8’s, Foster Press Mini Stocks, Interstate Battery Hornets and the West Coast Vintage Modifieds. Tickets can be reserved on www.evergreenspeedway.com or you can call the Speedway office at 360-805-6100.

Don’t forget that the Evergreen State Fair is right around the corner. Check out the schedule for this years “Summer Nights with the Stars” series featuring Pat Benetar & Neil Geraldo, The Casting Crowns, Lee Brice, Jerod Niemann and Vince Gill. Tickets are on sale now at www.EvergeenFair.org. As always, Evergreen Speedway lines up outstanding family entertainment during the fair beginning with the Northwest Truck Pulls and a huge opening night Fireworks show on September 27th. Check out www.evergreenspeedway.com or www.EvergreenFair.org for more information.