Frontier Communications presented its first Family Night of the 2015 season, and a nice crowd took advantage of the beautiful weather at Evergreen Speedway.

The NASCAR Interstate Batteries Hornets kicked of the main events with an exciting 25 lap feature. Mike Ridley drove a masterful race starting mid pack and carving his way through the field the 22 to take the win over Scott Hunt in 2nd and Mark Hubbard with an expiring engine finishing 3rd.

The Monroe Grocery Outlet NASCAR Super Stock Figure 8’s were up next with their 25 lap main. Quenton Boreson continued his winning ways in the 17 car, with veteran Doug Delfel finishing 2nd and Tony Hill, who is returning from a long layoff placing 3rd. This popular group is really gaining momentum adding new and vetreran drivers to fan favorite Figure Eight Racing!

The Northwest Pro 4 Trucks made their first appearance at Evergreen with a 25 lap main. Rick Shaver drove his number 43 truck to a main event win over the father son team of Aaron and Matt Green finishing 2nd and 3rd. The race went the first 22 laps under green.

Then the real fun began after a short intermission. The Les Schwab Street Stock main event was one that fans will remember for quite a while! Mike Marthaller in the 44 car had the early lead, then on lap 18, Carl Davidson took the lead, holding it until a caution on lap 26. Last week’s winner Jim Foti took the lead with a brilliant move diving under the 68 of Davidson on the restart and brought his #85 car to the checkered flag for the second win of the season. Davidson later reported he had a tire going down and could not hold off the challenge.

The final event of the night was the 75 lap Speedway Chevrolet NASCAR Super Late Model main event. 16 cars started the race on the 3/8’s oval, with Andy Sole on the pole, and 7-Time Champion Tom Moriarty on the outside front row. Moriarty got the lead early on, with Sole all over the back bumper cover of  Moriarty’s #12 Chevrolet. Moriarty held the lead until a caution on lap 44. The #20 of Sole tried to sneak under Moriarty on the restart, with another caution on the restart negating Soles advance. On the ensuing restart, Moriarty and Sole drifted up in turn 2, allowing last season’s champion Mike Holden to go to the bottom of turn 2 and get the lead. Moriarty and Sole got together, tearing the nose off the #12. Moriarty ducked into the pits to get it removed. Rookie Luke Selliken was able to move into second place, with Doni Wanat and Andy Sole locked in a battle for third. Sole and Wanat get together in turn 3 causing both to spin, thus moving the 75 of Brandon Scheiber to move up to 3rd. On the final lap Sole collected Scheiber in turn 4, moving Jeff Knight up to 3rd for the finish. 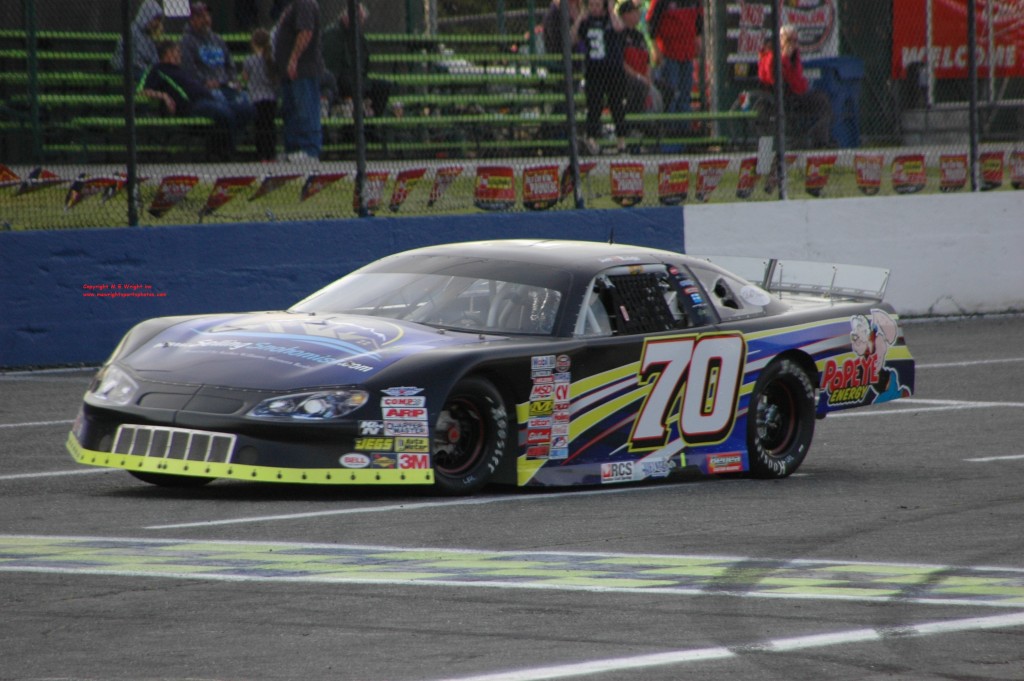 Next up at Evergreen Speedway will feature the return of the WESCO Sprint Car Series, along with the NASCAR Outlaw Figure 8’s, NASCAR Les Schwab Street Stocks, NASCAR Interstate Batteries Hornets and an Exhibition event by Evergreen Drift. Tickets for this and any other event at Evergreen Speedway can be reserved online at www.evergreenspeedway.com.

Share
Previous Reminder Tire and Fuel Sales Thursdays and Race Days Only
Next FAMILY PASS: Military Get in FREE May 9!