It was a totally packed house at Evergreen Speedway Saturday night

to welcome the start of the 2015 season, as the Seahawkers of Snohomish County celebrated their favorite teams back to back NFC Championships with a day and night chock full of activities for fans of all ages.

Action on the race track was hot and heavy as 4 classes kicked off their respective seasons. First up was the Buzz Inn Steakhouse Stinger 8’s thrilling the crowd with a 30 lap main event. The race was slowed up on lap 8 with a 3 car hit in the intersection that retired 2 of the 3 involved. Brandon Lindberg led the field to the checkered flag, followed by Matt Somerville and Lance Ograin driving his #74 car to a third place finish. 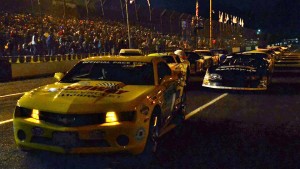 The Foster Press NASCAR Mini Stocks were up next with their 30 lap main, Darrington’s Bobby DeYoung started at the back of the field and absolutely carved his way through the field, until colliding with Brad Thomas coming out of turn 4 on lap 12. DeYoung couldn’t recover from the spin, allowing early leader Scott Burby to lengthen his lead. Burby’s car went away on him, allowing last year’s champion Trenton Moriarty to run away from the field for an over 4 second victory over Burby with Travis Woodward finishing in third place.

The Speedway Chevrolet Super Late Models put 18 cars on the grid for their 75 lap feature. The 4 car invert put 7 time Evergreen Speedway Champion Tom Moriarty in the appropriately numbered and Seahawk themed 12 car on the pole. Needless to say with a packed grandstand full of 12 fans, it was a perfect event for Moriarty as he drove the 12 car to a wire to wire win. Moriarty was threatened by Tyler Tanner is his familiar #65 as the laps wound down, but managed to take advantage of picture perfect restarts to get the win. Tanner finished 2nd with Cle Elum’s Andy Sole driving his 20 car to a third place finish.

After the races were done, Mr. Dizzy Mike Buse gave the fans a thrill with climbing into a perfectly good mini-van and promptly had his crew blow the thing to smithereens, with Mr. Dizzy walking through the flame to a wildly cheering crowd. Them a stunning fireworks display with a great soundtrack and Seahawk radio calls ended the night for a throng of Seattle Seahawk fans.

Next up at The Super Speedway of the West will be the season debut of the fan favorite Outlaw Figure 8s, along with the Foster Press Mini Stocks, the Les Schwab Tire Street Stocks, Interstate Battery Hornets and Buzz Inn Steakhouse Stinger 8’s. Tickets for all events can be purchased online at www.evergreenspeedway.com or by calling the speedway office at 360-85-6100. 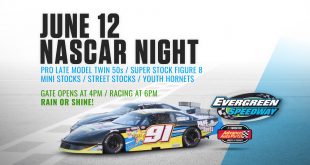